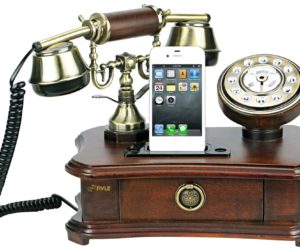 Mobile phones and wireless technology are all around us nowadays, and it’s hard to imagine a life without it. Still, the mobile phone is a relatively new invention, and it’s quite impressive seeing these young  ladies experiment with a wireless phone back in 1922:

How incredible it may seem, the actual history of telephony goes back way further, all the way to the 19th century.

Every great invention is preceded by people that laid the foundation for others to build upon. In 1838 Samuel Morse made the first steps in telecommunication by inventing Morse code, which allowed people to send and receive complex messages over long distances trough electrical signals and copper wire. After Congress granted Morse permission to install the first telegraph cable, in 1844, the copper wires rapidly spread out across the globe.

From telegraph to telephone

Now that it was possible to send coded messages through a copper wire, shouldn’t it be just as easy to the same with an audio fragment? This was on the mind of many inventors after the telegraph became popular, and by 1870 several inventors were working on creating the first telephone. On a given day in March 1876 Alisha Gray and Alexander Graham Bell both applied for patent on their creation. Unfortunately for Gray Bell was a few hours earlier, which lead to Bell’s fame as inventor of the telephone – and he made good money with it. 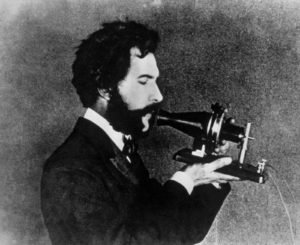 On March 10 1876, Alexander Graham Bell spoke the first words ever to be wired through a telephone cable: “Mr. Watson -come here- I want to see you.” These words were meant for his assistant, who was in the adjacent room. Even though the reach of a phone call was very limited at first, by 1890 most parts of Europe and the USA were covered and hooked up to the network. In the USA alone there were 250.000 phones at the time.

In 1896 the ‘candlestick’ models were replaced by telephones that used a rotary dial, and these models actually started to look like telephones as we’ve used them most of our lives (unless you’re still a kid, but in that case; have patience, we’ll get to the familiar stuff). This would remain unchanged for the decades to come.

Are you curious about the next steps in the evolution telephony? Be sure to check out our next articles in the series!