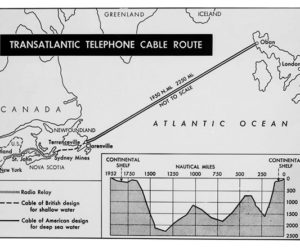 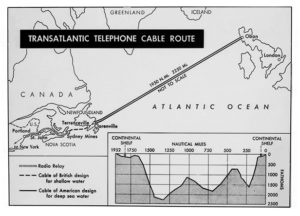 After the atrocities in the Great War people were certain: this would never happen again. Everybody put their focus on a future of cooperation, innovation and hope. These positive sentiments resonated in the technological developments that characterized that era; airplanes got bigger and were able to cover longer distances, and radio and television brought the world closer to each other.

With the help of radio communication telephone rapidly took over the world. On January 7 1927 the first trans-Atlantic phone call was realized between London and New York, between AT&T President Walter S. Gifford and Sir G. Evelyn P. Murray, secretary of the British post office. During this conversation Gifford declared: “We are opening a telephone channel between New York and London. The people from these two major cities will be brought within speaking distance of each other.” He added: “They’ll become neighbors.”

Gifford’s speach made it clear exactly what hope and expectations the opening of this new communication channel funded. Not only will it bring people closer together, it will also boost technological and economic advances. “Nobody can predict the outcome of these developments,” he stated.

Gifford’s expectations soon became reality and the world indeed became smaller. On April 3 1930 the trans-Atlantic  phone service reached Argentina, Chile and Uruguay; the rest of South America followed not long after. Just five years later the entire world was connected by telephone. On April 15 1935 a phone call between Gifford and AT&T Vice President Miller was realised. While the two men were only 15 meters apart, the call was routed through the longest circuit ever, which was a whopping 37.000 kilometers! Operators from all over the world were listening in on this conversation. Java and London were asked to give their local times, and Gifford was joking with the British operator – Amsterdam wasn’t connected at that moment.

Even though cables were wires through all land in the world, telecommunication accross oceans was still very dependant on radio technology. Efforts were made to wire cables through the bottom of the ocean, but these repeatedly failed. It wasn’t until 1956 that the first permanent cable ran from Scotland to Nova Scotia – which just so happened to be Alexander Graham Bell’s place of residence.

With the emergence of transatlantic telephone a new profession arose; that of the operator. The first telephone operators, at the end of the 19th century, were teenage boys. They were often rude and hard to manage, which made telephone companies decide to hire women; they were friendlier ánd cheaper. The first female operators in the world were sisters Emma and Stella Nutt, they started working for the Boston Telephone Dispatch in 1878. 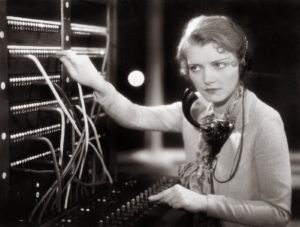 Since they were in direct contact with the public, these operators had to radiate a positive image. Therefore they received technical training as well as schooling in appearance and formality. Easy at first, the more people that started using a phone the busier it got for the operators. By 1910 they couldn’t leave the telephone alone for a single minute.

To be able te cope with the growing amount of calls phone companies started implementing choice menus. These allowed people to route themselves without intervention of an operator. Despite this the number of operators kept growing until it reached its peak in the late ’40s, with about 350.000 operators working for AT&T alone. In the ’50s machines started taking over. In the beginning operators were still needed to accept and transfer long distance and collect calls, but their numbers rapidly decreased.

At the end of the ’30s the telephone connected people all over the globe and made the world a smaller place. Not only did it bring people closer together, like Gifford had hoped, but a new war threatened as well. What the effect of this new war on the development of telecommunication would be is something we’ll discuss in our next article in this series.