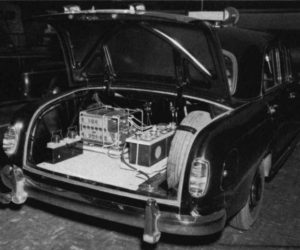 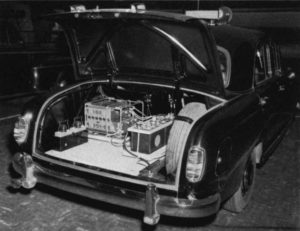 After World War 2 the development of telecommunications took a flight, and just like with earlier innovations AT&T and Bell Laboratories were leading the movement. Already in the ’40s AT&T started  developing an area code system, which was implemented in 1947 dubbed the ‘North American Numbering Plan’ (NANP). This contained all area codes for the USA and Canada.

Mobile phones from those days certainly weren’t anything like the mobile phones as we know them today. They resembled car phones – if you can even remember these. Moreover, the first mobile calls could only be made from a car; the dial out system had to be placed in the trunk since it took up so much space. Back in the ’40s it filled up the entire trunk of a car. 20 years later the size was brought back to that of a briefcase.

The American Bell Telephone was once again leading with the introduction of this technology and was the first to offer a mobile telephone service. On June 17 1946 the first mobile call was made in St. Louis, and shortly after Bell Telephone introduced the first car phone service in Chicago. The rise of car phones and mobile telephony also meant the comeback of operators, since every call had to be routed manually. However, Europe had to wait for these innovations to arrive. The first car phone was introduced in 1958 in Germany and it certainly wasn’t a common thing. The happy few that could afford to buy one had to pay almost 50% of the price of a new car.

Telecommunications didn’t stop changing here; during the ’50s and ’60s new ideas were developed. We’ll have a closer look at some of these in our next article.