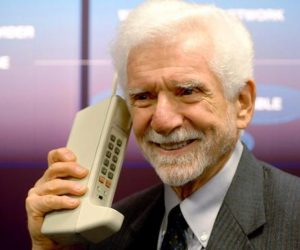 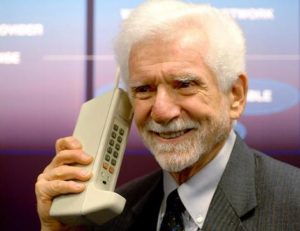 In the previous installment of this series we discussed the first ‘mobile’ phones: huge machines that could only be used from the trunk of a car. Now we’ll talk about the first mobile phone that actually was mobile.

In 1983 the American company Motorola got a license to commercially market the first mobile phones. These became known under the name DynaTAC 8000x and had an instant classic design because of their bone-like shape. However, buyers had to wait until 1984 before they were finally able to hold their own DynaTAC 8000x.

To properly hold the phone a firm grip was required, since it weighed almost 2 pounds with a lenght of 25 centimeter – excluding the long black antenna. It was a large, heavy and above all pretty clumsy to hold. Not something you would easily slide in your pocket. Besides all these rather impractical characteristics the DynaTAC8000x was very expensive at $3995,-, which by definition made it unavailable for the masses. It’s hard to imagine nowadays, but a mobile phone was simply a thing for the elite – or at least just a small portion of the population. This small fortune would allow you to talk with 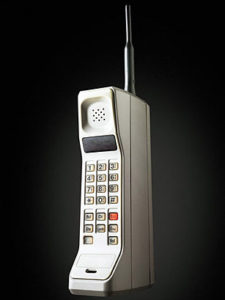 someone for half an hour and you could store about 30 numbers in your phone. The display couldn’t handle more than a few red digits. We hear you thinking, “Can it get any worse?” Well yes, it sure can; it took a whopping 10 hours to fully charge the phone!

Still, this mobile phone was truly revolutionary compared to the car phones in our previous article, which had to be carried in a briefcase. This revolution can be attributed to one man: Martin Cooper. This 87-year-old ‘father of the mobile phone’ looks back  on his invention: “We always knew the day would come that we would all walk around with a mobile phone. But I never thought I’d be around to witness that.”

Although he seems proud of what he achieved, Cooper looks back critically on the development process and Motorola. The company kept asking him when his ‘child’s project’ would bring in some money, since investments had already been made. Eventually Cooper succeeded to monetize his hard efforts for both himself and Motorola. The company became the global market leader for mobile phones for many years, until it was surpassed by Nokia in 1998.

In our next part we’ll explore some of the more recent steps in the history of telecommunications.