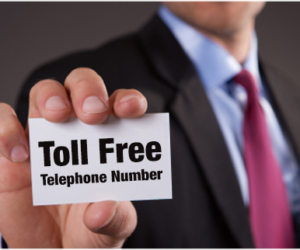 Our previous two articles in the series discussed innovations in hardware, such as the ‘mobile’car phone and the first actual mobile phone. Parallel to these inventions ran a lot of changes in the telecom industry. This article deals with one of those innovations; the rise of Toll Free service numbers. 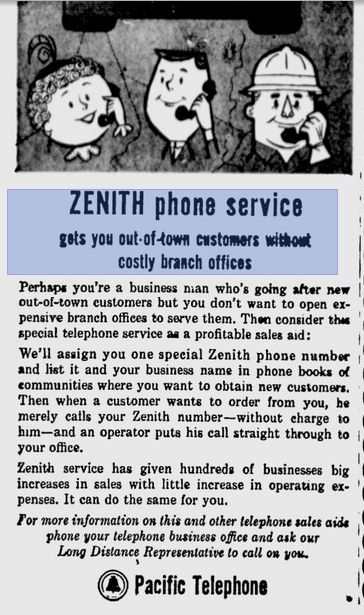 AT&T introduced toll-free service numbers to the American market in the ’60s, but free phone calls were possible before that. During the ’50s the USA and Canada had something called Zenith numbers. To dial these you first had to call a provider, who would route the call to the corresponding Zenith number, which was listed in a special phone book. The costs were charged to the owner of the number. An advertisement in The Spokesman Review from 1959 (to the right) explains the use of a Zenith number for any given business. In England a similar service was available, the so called Freephone Service. German-speaking countries knew this as R-Gespräche.

In 1967 AT&T introduced InWATS (Inward Wide Area Telephone Service) in the USA; a system that allowed people to make phone calls for free without the interference of a service provider. This was the birth of the toll-free service number. At first this toll-free number was quite expensive, which meant that the only companies actually using it were the ones that received a lot of calls, like hotels or airports. The expectations of this system weren’t too high, but it still spread accross the country. 25 years after its introduction of InWATS no less than 40% of the long distance calls in AT&T’s network were made through toll-free service numbers.

As with many other things, Europe followed much later. In 1985 British Telecom introduced Linklink; a toll-free service number system with two prefixes, 0800 and 0345. For calls to the 0345 numbers the local tariff had to be paid first, the 0800 numbers were free of charge. Later these became known as ‘lo-call’ and ‘freephone’ numbers.

In the ’80s free 0800 numbers were implemented in most European countries. In Germany the Deutsche Bundespost introduced a system called 0130 Service. Callers could dial these numbers against the local tariff, and in 1990 these numbers became available for free. On January 1 2001 all 0130 numbers were replaced by 0800 numbers, which became the standard.

Service numbers in the now

Thanks to the ongoing digitalization it’s now possible to split the (dialed) number from the connection, which makes it easier to port or route numbers. A service number always used to stay with the same provider, but nowadays  you can easily port your number to a different one. Besides this the service that can be provided in the current ‘intelligent network’ is a lot more flexible, a number can be routed without any hassle. And that’s where we come into play, since toll-free service and freephone numbers are our expertise.

In the last part of this series we’ll tell you all about the digitalization of telecommunications.