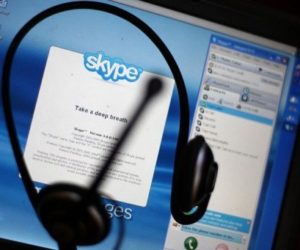 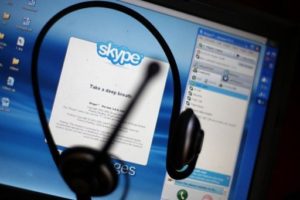 We already told you about the rise and evolution of toll-free servive numbers and the first mobile phone. In this article you’ll learn more about the further evolution of digital telephony and mobile telephones; from large analogue machines to the intelligent smartphone as we all know it.

When the first mobile phone appeared in the ’80s there were different mobile networks throughout the world. Frontrunner was  Japan, where the first commercial network in the world was already active in 1979. At first it was just Tokyo that was connected, but within 5 years the rest of the country had joined the capital. The USA followed soon after, and  Europe responded by setting up Global System for Mobile Communications, or GSM.

All these different networks had one thing in common: they could only be used for calls through the analogue network, but soon the 1G network made a name for itself. In 1991 the first digital mobile network was implemented in Finland by Radiolinja, what later became part of Elisa Oyj. This network was labelled 2G; the second generation of wireless telephone technology. 2G had a few advantages. Information could be transferred encrypted over the digital network, it was more efficient and 2G made it possible to send data as well – like SMS and MMS. And everything was secured digitally.

Though the mobile network evolved rapidly with the introduction of 3G in 2001 and 4G in 2014, the 2g network is still being used today in some parts of the world, but more and more countries choose to gradually shut down their 2G networks.

Already in the ’70s Theodor G. Paraskevakos developed the concept of a phone that could connect intelligence and data processing with a virtual display. This concept could be realized once 2G made it possible to send data over the network. 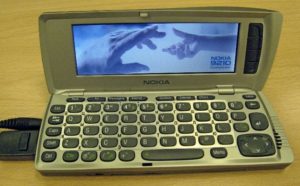 There are several answers to the question who introduced the first smartphone to the market. In the middle of the ’90s there were 2 devices which could be used to call, email and fax, and a digital calendar was built in as well. These were the early versions of the smartphone:

The Nokia Communicator (photo on the right) had all the functionalities of a personal computer, like email, web browsing, word processing, and combined these with fax and telephony. The device costed over 800 dollar and was everything but handy and easy to use, which scared away consumers and kept them from buying one. The owner of Nokia at that time, Jorma Ollia, stated: “We had exactly the right view of what it was all about… We were about 5 years ahead.”

The first smartphones were primarily suitable for business use, because of the high prices and unpractical design. Its main use was that of personal digital assistent.

The name ‘smartphone’ was coined by Ericsson in 2000, in a campaign to increase its popularity amongst consumers as well. With the introduction of the 3G network (in 2001) and the arrival of lighter, more simple devices at the same time the smartphone finally became a hit. In 2007, the year that Apple launched the first iPhone, already 8 million people worldwide had used a smartphone to visit the internet, and in 2012 there were over 1 billion smartphone users worldwide. It’s estimated that by 2017 the number of smartphone users will approach 2,5 billion. This makes us wonder what technological developments the near future has in store for us – something we’ll discuss in the final part of this series.