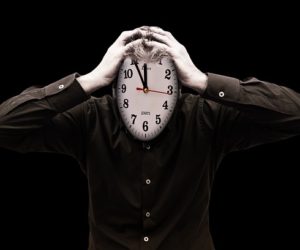 It’s no secret that since the dawn of the American Dream, even in Europe everyone has been looking for a way to make millions. Celebrities, people who are born into money, and Silicon Valley moguls who had the right idea at the right time make it all look so easy. There is an ever-growing dialogue of “if you just work hard enough, you can make your dreams come true”.

But reality looks different: when people earn less, often much less, than that, dreams of becoming a millionaire can be very far away. So we often use this line of thinking to justify working 18 hour days to Get Rich. But life isn’t “when we are rich”, it’s right here and right now. And what do we end up with? Stress! Lots and lots of stress!

En route to Burn Out City

It’s not uncommon to experience stress at work. Studies reveal that 46% of workplace stress is caused by workload. With big projects, deadlines, dealing with difficult clients or colleagues, this isn’t necessarily ground-breaking information. But there is a fine line between a normal and unhealthy amount of stress. A study done at Harvard found that time and productivity lost at work due to stress costs American businesses somewhere around $30 billion per year. In Europe, it was even found that stress leads to a loss of 27 productive work days per employee, per year. That’s one whole month lost per person, per year, due to stress!

Those of us who have that big, rich American dream in our sights tend to put in long hours and extra effort, but we’re never sure if it’s enough. We’re often left to our own devices with no praise or compensation for those extra things in the short term. It’s in those situations where we can be at risk for going from stress to burn out.

Left [un-paid-attention-to], excessive stress can lead to demotivation, constantly thinking about work, irritability, difficulty making decisions, and (lack of) sleep issues. Moreover, it can cause headaches, nausea, and even weaken our immune systems, leaving us to get sick with colds, flus, etc. more often.

Even more, putting in extra hours and effort doesn’t always lead to job security? However, job insecurity is another major stressor! Research shows that in women, this type of stress leads to higher rates of illnesses, including diabetes and chronic migraines and neck pain; in men, chest pains and hypertension, and up to two weeks taken off of work due to these issues.

Experts on the subject tend to suggest lifestyle changes, such as adding exercise and meditation to your daily routine . But when you’re already feeling bogged down by work, making these kinds of changes as your first step to relieve stress can seem overwhelming.

So what if we all took that little step back to telephony? Imagine working from home with a phone number connected to your company’s virtual PBX, so you can be reached just as though you were sitting in the office, without the stress of always having to be there. Contact us for more information about virtual phone numbers worldwide.

Health Crises and Corporate Communication Policies Amidst the struggles of the current corona virus pandemic, your…