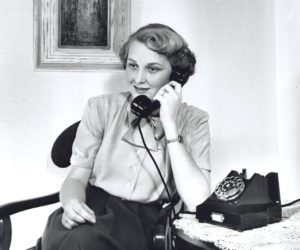 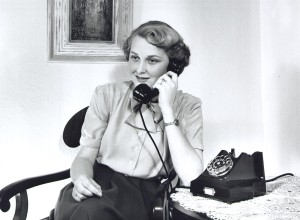 Telephony has seen accelerated innovations the last 25 years, a development that was introduced with the advent of mobile telephony late last century. The introduction of the smartphone, some 10 years ago only gave a significant boost. The old-fashioned Bakelite dial telephones of the past are the intelligent smartphones of the present. But growing number of people seem to think that phone is dying, partly driven by the growing use of communication via digital channels, such as social media and WhatsApp. That begs the question;

Is telephony over and out?

“Not a chance, the telephone is still the most used method of communication when you need to reach someone quickly. Everyone, young or old, can make a phone call and the main advantage is still that we get an immediate response. That works the best and quickest”, says Hans Lasonder, our CEO. “Of course we email and chat where we used to make a phone call, but the individualization of society increases the need for personal contact. After all, we want to hear each other’s voice, don’t we?” The current trend to abandon the reliable and qualitative traditional phone lines and migrate to IP and internet telephony can’t be stopped. It’s only powered by the many apps that provide users maximum flexibility, transparency and insights in usage and costs.

However, potential users of VoIP still have legitimate doubts, such as safety (‘What about eavesdropping?’), quality (‘Is it sufficient for business calls?’) and accessibility (‘Can I still call when the network processes a lot of data?’). Such issues don’t play a role when the data network is being supported by a stand-alone telephony service; albeit in a trimmed down fashion and for specific applications. These so-called hybrid environments, that are being sold a cloud service at the moment, perform  best with calls to special service numbers. Incoming calls can be transferred to an IP environment and when the data network fails the call will automatically be forwarded to a mobile or fallback number.

The future of telephony: traditional vs. VoIP

Then there’s latency. A delay in transferring speech data can be a valid argument not to transfer foreign calls over IP. Accepting calls from abroad on can prove to be difficult when latency in data transfer occurs. On a national level, however, VoIP is here to stay. There are developments going on in traditional telephony as well; next to the significant cost savings in recent years services like Intelligent Routing are a reason to stay away from VoIP for now.

Different parties are currently developing ‘speech to text’, where spoken word is being converted to written text, which is being delivered by email. This technique is similar to the already popular ‘voice to mail’ where spoken word is being stored as audio file en delivered to the recipient as email attachment. De PTSN netwerken ondersteunen deze functionaliteiten volledig en de over het algemeen superieure kwaliteit van de verbindingen verkleint de foutkans op besproken conversies.

Another innovation that has been around for a while, but still waiting for its big breakthrough is de option to implement ‘speech control’, where vocal commands are being wired to a system instead of dialing the keys for to choose an option. This technique is still in the development stages, but in time it will undoubtedly be possible for two people that don’t speak each other’s language to have a phone call, both speaking in their own language and have it translated real-time for the other side. Needless to say transfer of signal and the quality of the connection are  key in introducing these innovations to a wider audience.

It’s safe to say that traditional telephony, especially when combined with innovations, is far from dead and still key to interpersonal communication. If only because it still proves its ‘good old’ image of ‘it never fails’, when we’re talking about data environments.

Search
Copyright 2021 - All Rights Reserved
Back To Top